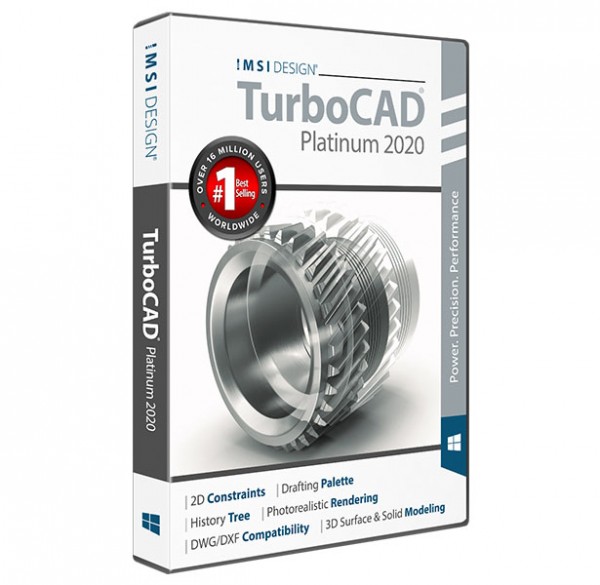 TurboCAD Platinum 2020 is a brilliant collection of professional 2D/3D CAD tools to design, modify, present, and document in an integrated fashion. An optional AutoCAD® 2020-like 2D drafting interface with command line and dynamic input cursor helps professionals already familiar with AutoCAD easily get up to speed.

If you’re new to TurboCAD Pro Platinum, features like the fully customizable interface, including an optional AutoCAD®-like 2D drafting interface, can help you get started.  Save more time with handle based editing and a GPU accelerated drawing engine.  Even collecting and assembling all external resources and entities attached to a drawing for distribution is simple with ePack.  Plus, TurboCAD is 64-bit compatible to manage even the largest CAD files.

TurboCAD includes an integrated suite of architectural tools that accelerate productivity in design and drafting, or in the documentation of existing compatible architectural models. The architectural objects are AutoCAD® Architecture (ACA) compatible so that .DWG models with ACA extensions may be read, modified, and documented as needed.

Create parts that remain parametrically controlled, even after insertion into your drawing.  Also draw variably constrained parts and convert them to parametric parts.  Parts can be saved individually, and libraries of .PPM objects can be created, shared, and reused from project to project.

All of the file formats that may be opened and imported, except bitmap images, may be used as an external reference (Xref). TurboCAD offers Xref clipping for dozens of file formats and binding of Xrefs, which can then be exploded and edited. Xref layers are also easy to manage, including with layer filters.

Extend the functionality of TurboCAD Pro Platinum by develop new tools, functions, and behaviors. Custom routines that are performed on a regular basis can be automated. Specific tools for vertical applications can be created and added. Even commercial plug-in applications may be developed and sold. Updated documentation and samples are provided and there is a wiki and forum-based support online.

A new local menu option has been added when right-clicking on a Ribbon icon Users can now change the icon size/icon text to “Large Image and Text”, which allows for display of a larger image of the tool icon with associated text.

When using the Ribbon Interface, as you change either the UI Scale or Icon size through the Options/Toolbars and Menus /Options menu, the Size and Style (with or without text) of the icon will dynamically change.

The new Repeat command allows user to repeat the previous command with a single click.

When editing a Block or Group, a (new) small toolbar appears in the upper-left corner of the drawing area. The toolbar displays the Block or Group name and includes a ‘Finish’ icon to return the user to the main Model Space.

Now, the intersection of two, 2D objects not in the same Work Plane can be snapped to.  Useful for 3D modification tools such Lofting, Covering and Extrusions.

As with Paper Space View Ports, the Drafting Palette now has an Option to select a Layer Set.  The Layer Set can contain both visible and non-visible layers. Previously, drafting objects did not take into account the visibility; rather it considered all layers in the 3D object visible, so user may have gotten drafting object with un-needed information.

This same Layer Set addition has been added to the Drafting Object via the local menu Properties:

Dimension values that drive angles, lengths, and distances within a constraint system can now be animated.  Animating these values provides powerful visual feedback to range of motion issues common in mechanical design problems.

The tool extends into 3D motion analysis when the dimension values are part of a 2D constrained sketch that is used to define 3D extruded, sweep, or lathed shapes.  Animating the dimension value automatically updates not only the sketch but the dependent 3D part.

The user interface provides a variety of controls to analyze the motion including step increments, range, loop, pause, and move forward or backward.

Exploded Viewports in Paper Space can now be created with Hidden Line and Non-renderable objects enabled.  In addition, extra lines which appeared in multi-story house have now been removed

The new Best Fit Circle and Line tools allow the user to draw a circle which is best-fitted through 3 or more defined points or a line through 2 or more points. Points can be extracted from a specified location or from a specific object.

The Auto-numbering tool allows you to select multiple text entities and have them auto-numbered.  Numbers are placed either at the end of each text block or can replace the text block.

A new “Auto Modifier" option has added. With this option enabled, the Opening (wall clipping contour modifier will be generated automatically. Previously the Opening modifier had to be manually defined. If the opening modifier was not defined, then a rectangle (opening extents) was always used to make a hole on the wall.  Only 3D objects are used as modifiers.

By assigning a Material to a 3D Solid object, the Density of that object is applied based upon the Material. Knowing the Density and the Volume of the 3D object enables TurboCAD to display through the Mass Properties tool, that 3D objects or collection of 3D objects’ weight.

New tool that once materials have been assigned to solid objects, allows the user to generate a Weight report and export it to a Bill of Materials.

The new Flatshot tool allows users to create a 2D view of a 3D object, including visible and invisible lines, and then save that view in the Blocks Palette. A great tool for creating stunning presentations!

Using the Facet Editor, you can now select all similar classes of ACIS® Objects – Blend Networks, Blend Sequences, Protrusions or Depressions, of a body part simply by selecting a single facet of that part. A powerful tool for replacing or removing a feature from an imported 3D part with no History.
Benefits
System Requirements

*TurboCAD is designed for desktops or laptops that meet the indicated system requirements. Windows RT technology used on some tablets is not supported.